Katie worked as executive administrator of the International Authors Forum from 2011 until 2016, building an international network of 70 associations of artists and writers from scratch, in order to create solidarity and defend their interests in copyright and fair contracts, and in order for authors to have independent representation at the World Intellectual Property Organisation in Geneva.

In doing this Katie worked closely with the writer Maureen Duffy, who has been fundamental to the development of support networks for authors including leading the successful campaign for the Public Lending Right in the UK, co-founding the Authors’ Licensing and Collecting Society and being Vice-President of the European Writers Congress.

Katie has also worked on Maureen Duffy’s archive and organised several events with King’s College London, where she and Duffy are both Alumnae and where Duffy’s archive is held, in order to celebrate and raise the profile of Duffy’s work.

Katie is International Co-Director of FUIS, the union of writers in Italy. With FUIS, she is publishing a collection of Duffy’s poetry in English and Italian (forthcoming in 2020). She also works with the cultural association Alberi Di Maggio in Italy, researching, writing about and working to preserve and communicate the oral forms of expression in the region of Italy bordering the Marche and Abruzzo.

Exploring a local culture in depth accords with Katie’s values of the absolute necessity of giving attention and value to culture and creativity at the local level in order to preserve cultural and linguistic diversity worldwide. Working at both local and international levels is a way to ensure the spirit of independent creation and diversity is celebrated and can be used to strengthen positive relationships between as well as within cultures and countries.

The aims of ADALPI are essential to this, working towards forms of intellectual property protection that are designed to respond to the specific environment, support the work of creators and sustain their work economically, and therefore enable cultures to continue to evolve from the grass roots, giving attention to human rights and the human perspective. 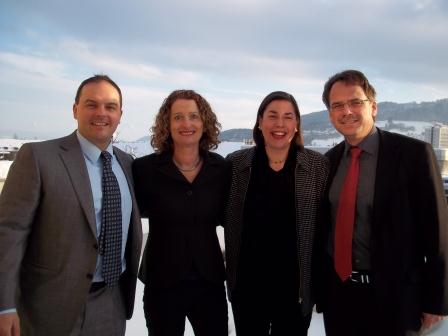 Barbara Callender has worked as a consultant on projects in the political, economic, retail and social sectors in Central and Eastern Europe, the CIS and Central Asia. She has organised conferences, seminars and study tours for the private and public sectors. Topics covered included intellectual property rights, public-private partnerships for infrastructure, BOT programmes, land reform, real estate and the travel industry. Clients included the European Union, UK DFID, the US PTO, the UNECE, First Conferences Ltd, Vnesheconombank and Ethical Corporation.

From 1998 – 2006, she was Programme Manager to a UNECE Advisory Group on the Protection and Implementation of Intellectual Property Rights for Investment, working with governments and the private sector in 14 countries in the region. In 2009-2010 she was consultant to an EU Programme on Turkey’s participation in the European Knowledge Economy, linking SMEs and universities in the Netherlands, Romania and Turkey.

She has written studies and reports on civil society, transparency, anti-corruption and clean energies. Publications include co-authoring an English-Russian Financial and Business Dictionary published by Price Waterhouse, and co-authoring and editing an Intellectual Capital Report of Turkey and Business Cases, published by the EU. She is a founder member of ADALPI, Chair of the European Movement in Wandsworth & Merton and founder member of damesnet.

Roger Chevallaz, Rechtsanwalt, is a member of the Bar of Berne/Switzerland and practises as Registered Swiss Lawyer in association with advokatur56 in Berne. He is a co-owner of reflecta ag.

Founded in 1997 and owner managed, reflecta employs some 30 staff at offices in Berne. The interdisciplinary and multilingual team uses a structured approach to tackle complex issues. Reflecta clients include private sector companies and governmental and other public bodies, at the local, city, regional or national level. The third client base includes foundations, associations and interest groups.

After studies in law in Berne / Switzerland and following his call to the Bernese Bar in 1984, he started his legal career with a small firm of Swiss Lawyers in Berne focusing on associations and political interest groups. From 1988 to 1998 he was Manager and Legal Adviser to different professional associations within the Swiss film industry and from 1993 to 1998 President of the umbrella association of the Swiss Cinema and Film Distribution Companies, ProCinema. From 1995 to 2007 he served on the Federal Film Committee and as an expert for the revision of the federal film law. Since 2003 he has been a Board member of the Swiss Anti-Piracy Federation SAFE. He is a founder member of ADALPI.

Kurt Kemper is an experienced all-round lawyer with particular knowledge in legislative techniques and procedures and international legal negotiations as a result of a long and distinguished legal career in both the German civil service and the World Intellectual Property Organisation (WIPO). His working languages other than German are: English, French and Spanish.

After law studies in Bonn and Freiburg (Germany) and Nancy (France) and the completion of the legal training programme, he started his professional career in 1973 as legal counsellor in the Federal Ministry of Justice in Bonn. From 1984, he was Head of various Divisions in the Ministry, including the Copyright Law Division from 1991 to 1997. In this capacity, he negotiated most of the EC Copyright Directives as German delegate in the EC Council Working Group which he also chaired during the German Presidency. He represented Germany in WIPO Expert Committees on copyright issues and as a delegate at the Diplomatic Conference of 1996, resulting in two copyright treaties. Between 1997 and 2005, he was a Director at WIPO in Geneva and headed various divisions, notably the Department for Legislative Assistance in the Development Cooperation Sector and the Division for Cooperation with Countries in transition to market economies. He also acted as Secretary of the WIPO Standing Committee for Copyright and Related Rights (SCCR). Since his retirement in 2007 from the Federal Ministry of Justice in Berlin as Head of the International Commercial Law Division, he has worked as an intellectual property consultant based in Geneva and with a focus on European, international and comparative copyright law. As from 2018, he has ended this activity and moved to Vienna for retirement. He remains associated with ADALPI as an honorary member.

Carlo Scollo Lavizzari, a lawyer qualified in Switzerland, South Africa, England & Wales, specialises in intellectual property protection. He is a strategist and problem solver in negotiations, conflict resolution and policy. Depending on client need, Carlo brings together proven specialists from a range of areas all across the world.

Brigitte Lindner has worked in the copyright field for over 30 years. Following studies in law and musicology, Brigitte gathered experience in private practice in France, Germany and the UK as well as in her former role as Legal Adviser to the International Federation of the Phonographic Industry (IFPI) in London. She practises as a member of the Bar of Berlin/Germany and a barrister of England & Wales in association with Serle Court Chambers in Lincoln’s Inn, London, specialising in international, European and comparative copyright law with a particular focus on the implications of human rights in the cultural sector. She also takes a keen interest in alternative models of dispute resolution, particularly in a cross-border context.

A frequent speaker at conferences and seminars, Brigitte also lectures on the Postgraduate Diploma Course/Masters in UK, EU and US Copyright Law at King’s College, London. She has published widely on copyright and related topics and is Co-Editor of ‘Copyright in the Information Society: A Guide to National Implementation of the European Directive’ published in 2nd edition by Edward Elgar. Brigitte is Vice-Chair of the British Literary and Artistic Copyright Association (BLACA), the British group of the Association Littéraire et Artistique Internationale (ALAI).

Brigitte’s musical interests are in opera and chamber music. As a singer and instrumentalist (cello and piano), she has participated in a variety of opera productions and chamber music groups. Brigitte also conducts research at the crossroads of law and music and has published legal assessments of Felix Mendelssohn’s dealings with his publishers and of the ‘Doktor Faustus’ controversy between Arnold Schoenberg and Thomas Mann.

Timothy Trainer’s intellectual property (IP) career includes government and private sector experience. In government, he was one of the original U.S. Customs IPR Branch attorneys in the late 1980s. At Customs, he trained and worked with Customs field officers, drafted infringement rulings, directives and regulations and supported the US Trade Representative’s office in bilateral Customs IP consultations. At the US Patent and Trademark Office, he was the point person on IP enforcement issues, including bilateral issues with China, prepared and delivered IP training programs, participated in bilateral trade consultations and represented the USPTO at WIPO.

In the private sector, Mr. Trainer was an associate at a Washington, D.C., law firm and president of the International AntiCounterfeiting Coalition (IACC; 1999 to 2005). While at the IACC, he co-chaired the UN’s Economic Commission for Europe’s IP Working Group and was a member of INTERPOL’s IP Crime Action Group. He was involved in numerous training programs in foreign countries and pursued domestic legislation.

In 2005, he established his IP consulting firm and services clients’ needs in trademark licensing, IP enforcement, and legislation. He provides IP support on various foreign projects with training of customs, police and prosecutors. In 2007, Mr. Trainer established Galaxy Systems, Inc., (www.galaxysystemsinc.com), which focuses on interactive online IP awareness programs.  His interactive online IP awareness tutorial tool has been licensed for use to the US Patent and Trademark Office and the US Department of Commerce’s International Trade Administration.

Mr. Trainer is a co-author of the book Customs Enforcement of Intellectual Property Rights, which has been updated and published each year since 2006. He was an adjunct professor at American University’s Washington College of Law from 2005-2012.
Mr. Trainer has a government clearance and is an advisor to the US Department of Commerce and the Office of the U.S. Trade Representative on IPR issues on the Industry-Trade Advisory Committee on IP.
For full profile and activities, visit www.globalipsc.com